First baking adventure in the kitchen

Our first Valentine’s Day as a married couple, falling right at the end of a whirlwind two weeks of our wedding, then our honeymoon where we also celebrated my birthday, so it was supposed to be another magical day day, right? Wrong. Reality set in very quick as Shane discovered he had been given another two sites down south that he needed to travel to as soon as possible. This would take him away right over Valentine’s and leave me in the midst of half unpacked suitcases and half packed yard sale boxes. Out the door we went on the Monday before the red and pink holiday, both of us to our respective jobs.

One would think I could’ve at least managed some sort of cute goodbye promising a “do-over” of our missed Cupid’s day, but alas, all I left him with was a quick letter hidden in his suitcase scratched on Trout Unlimited notepaper; the free type of notepaper you get in the mail when you get a “thanks for your subscription” type junk mail. Meanwhile, when I came home from work, I found a commical, sweet card on my pillow. Normally, I would be more on top of something like this, and would’ve maybe slipped in some card making or something, anything on the sunday prior, but no sooner had we landed from Mexico, Sunday I was off again and involved in an all day affair of a fashion show for a Bridal Show in my hometown.

Now I had to figure something out! My cousin Leah said I was lucky, now everything Valentine related would be half off. This was true, but not like me to get him a heart shaped box of chocolates with a picture of a frog that said “I am TOADally into you”, and yes, I actually saw that at a drug store. Making something is more like me, and baking something is WAY more like me. But as I stared despairingly into my new kitchen, which is really an old, small kitchen,  I didn’t want to make too much of a hassle for myself, especially knowing I probably had no ingredients.

I had recieved a whoopee pie recipe book from my Aunt Jeanne for Christmas, and though that now might just be the perfect time to crack that puppy open. The recipes looked easy enough, and like any good wife, I know the need to know things about my husband. Like his favorite flavors, raspberry and chocolate. Just kidding. The chocolate part is all me. In fact, any time I bake something with raspberry for “him”, I always end up pairing it with chocolate, chocolate, chocolate, and though he always enjoys what I make, I am, in truth, the chocoholic. So I flipped through the book hoping for some raspberry something, and luckily they had it, and paired with vanilla.

So pleased to make something really different and new and in a flavor that he would genuinely enjoy, I set off to un-package my brand new Kitchen-Aid tangerine colored mixer! It was difficult to pull out of it’s tight cardboard box being buffered by the styrofoam chunks, but finally i triumphantly plugged it in and turned it on AND-nothing happened. Well, something happened, it hummed. Huuuummmm. So I flipped it on and off, and it still hummed. I lifted the head and put it down it hummed. I tried different settings. Hum. I plugged it into a different outlet. Hum. Nothing happened.

This is when you turn to plan B, right? Except, I hadn’t even had a plan A. Making these raspberry whoopee pies was my best plan. I videoed the humming mixer and sent it to my aunt and my mom and simultaneously got out a hand mixer that I had from college. I hardly, if ever used the thing, but it would have to do. I got out my pretty white batter bowls from my aunt and cousins, and while describing what was wrong through messages to my mom and aunt began to mix the easy batter in the big, batter bowls.

Now, I had just, to my delight, vacuumed the whole upstairs of my new home. The vacuum I received for my wedding shower is small, but does the job well. Jagger hairs still cling to anything and everything they can, but, I was pleased with my vacuum and homemaking skills. Then I turned on my one speed hand mixer. Goodbye vacuum progress, hello new mess to clean up. Instead of stopping and just mixing the fairly easy batter by hand, I forged ahead, unwilling to be defeated by small appliances.

Finally mixed, I doubted the book’s claim to this recipe making 20 halves that would turn into 10 full gobs. It made a safe 15, which left me one buffer when trying to find matching halves. And let’s face it, it really actually left me one to taste test. Seven big whoopees it would be, not a bad amount considering how heavy this desert is, you definitely don’t want these lingering, tempting you for days in your kitchen. Seven is still probably four too many for a couple. 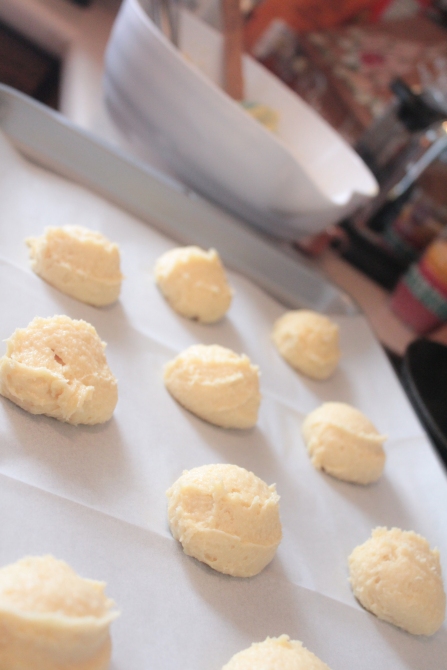 For the icing, any icing recipe really, I generally see the recipe, know how it will turn out, and make my own adjustments. Batters I am less likely to edit right off the bat, but this one I actually did. For icing though, I have a base formula that goes over really well; I hinge many icings off of it. This recipe looked pretty good, I actually didn’t up the butter, what I did add more of was the amount of raspberry jelly I put in. Again, the poor one speed hand mixer wasn’t the greatest choice, but at least it wasn’t whipping sugary butter chunks all over the counter and floor.

Finally I put together the wonderful whoopee pies, and ate one, and oh my. This recipe was a keeper! I was tempted to skip lunch and just eat another, but I refrained. Despite it being a very heavy treat, the flavor was delicate and not too sweet. I was worried that the raspberry might get  lost in the rich buttery, vanilla cake, but it held it’s ground.

In the end, it all turned out okay. I got the floor re-vacuumed, and still had time to go to the gym before work. Feeling pretty pleased with the outcome, I had the additional delight of extra filling; I decided I would make another batch of whoopees the next day to give away. My sister-in-law had gotten Shane and I a basket full of “firsts”, wines, that I thought I would leave out with a cookie for Shane when he got home late from his flight Thursday, and by the end, it looked like I had actually put a lot of thought into things.

I have been thinking a lot about patience. I love the fruits of the Spirit, I love them so much so that I had them snuck into our marriage vows. Now, no one was around, except for Jagger, so I could’ve lost my cool and no one would have seen it, judged me, and thought less of me. I even could’ve given up a few times, grabbed some 50% of Valentine’s item at the store and called it quits there, but I wanted to finish. I tried to stay calm and push through all the silly roadblocks that cropped up, and I have to say, digging into my patience reserve helped me through the day. Little moments add up, even little moments no one sees. If we treat these little moments like my college blender, all with one speed, super fast, with the thought of if I just get through, then at least it will be done, then we will splatter these little moments and make a big mess of things.

An aunt and uncle had framed as a wedding gift for us the famous Corinthians verses that starts off with love is patient. It is a beautiful reminder of something we let go all too often as busy, on the go, people. This was my little statement of love, and therefor it deserved a measure of patience. I am really happy with how the fun cakes turned out, and Shane enjoyed them too!

I am including the recipe since I edited it